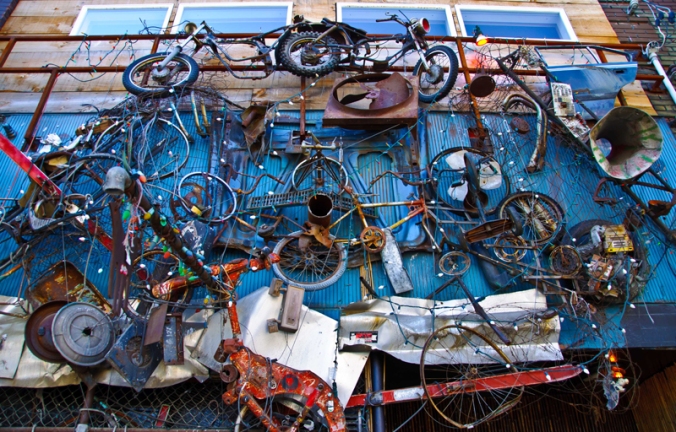 From the outside, the Bovine Sex Club can trick many into thinking they’re walking past a contorted pile of garbage, but in reality, it’s one of the most beloved clubs in Toronto. On top of that, it’s 25th anniversary has it recognized as a heritage building by Heritage Toronto. Bovine owner Darryl Fine has been there since the beginning, and in our new interview, he reflects on the venue turning 25, memorable shows, and how the Bovine became a Toronto music scene mainstay.

25 years is quite the accomplishment, especially taking into account the location. What’s the most gratifying part of celebrating that triumph?

Yeah, it’s super expensive to be here. Competitive, I don’t really think about that too much. Not in an egotistical way. It’s just when you get to a certain age, the club has a sustained bottoming out bunch of regulars that will keep it open. As far as an accomplishment goes, I don’t think it’s an accomplishment, I think you have to credit the musicians and the regulars. We’re doing some music programming and we hope we have some good taste in bands and DJ’s and staff, we can take a little bit of credit for [that]. But honestly it’s for the love of music, otherwise we probably would’ve been gone 23 years ago.

The outside really throws you off a little bit. I’ve heard a lot of people be confused by what’s inside.

Oh for sure, I’ve had people walk by for 20 years and catch me outside one day and say “I’ve been working down the street for 20 years and I really want to know what’s inside,” because of course there’s no sign. Your readers will see it as a big junk sculpture, which is now protected by Heritage Toronto as a heritage site, because it’s 25 years old. There’s a picture of it in the National Gallery in Ottawa, some photographer sold them an expose of Toronto about 15 or 20 years ago and there’s a picture of the Bovine and it’s called the bicycle bar. Lots of old bicycles.

It’s definitely interesting. Got that inspiration from a few places, one in the states, one in Toronto, 30 years ago that had a little bit of a junky feel, but we’re 100 per cent junk. Environmental. If you have junk, bring it down. Old tv’s, we’ll hook them up. (laughs)

You’ve described The Bovine as a “rock n’ roll cheers.” What do you think has kept the locals loyal for so long?

It’s a home away from home for bands on the road, even 25 years ago. The Cult was coming, Queens of the Stone Age maybe 20 years ago. People when they didn’t have any money, they were on their way up, they need a place to call home socially when they’re on the road. We’ve kind of always been that place for bands. When the bigger bands connect with the smaller bands here, it gives it a bit of a cache. The bands that play here drink here after.

We’re not a venue where you play your show and leave. It’s more like if the Dominion Tavern (Ottawa) did live music all the time. The Dominion is a place to drink in general, where as somewhere like Zaphod’s, I never hung out there for a minute it was over. We’re not like that, we’re a real traditional rock n’ roll bar with a stage. So when people are finished playing rock n’ roll on my stage, they can cozy up to the bar and pound drinks, look for chicks, find trouble, ask where the after hours is. We’re a big information network for music people in the city and when they come through the city.

We also do a bunch of stuff the Dominon Tavern wouldn’t do. We’re fully engaged with Pride Week [and] the Toronto International Film Festival every year. We’re a bit of a chameleon, and even though the music people have to take a week off, they don’t anymore. They come down anyways because they know there’s going to be some shenanigans happening. Bill Murray dancing in the back of the Bovine with a tie around his head, or Mickey Rourke dancing around the stripper pole on stage with his pants down. Something stupid will happen during TIFF and both of those things have happened.

It is a for every man, or every woman, or every trans type of place. People can have fun here and it doesn’t necessarily have to be punk rock or metal fun.

Queens of the Stone Age have been friends of Bovine Sex Club for the past 15 years.

The amount of bands who’ve come through the venue is uncountable. Are there any shows or events that are most memorable? Good or bad.

We’ve had some other memorable shows, we had COC play here on my birthday one year. The Illuminati’s played, Carole Pope, Sum 41. Billy Talent did a huge fire relief show when all the buildings burnt down across the street from the club about nine years ago.

That must have been nuts with all of his energy.

Have there been any bands over the years that you’ve wanted to have play there, but didn’t get the opportunity to book?

Of course, like a thousand bands. I have so many good friends in bands and it’s never worked out. One thing that did work out once was having Against Me! play, which was incredible in a small venue. I’m super dooper friends with Queens of the Stone Age, but it’s never worked out. There’s been times where there was almost a small gig done by record companies, when record companies spent money on that 15 years ago. That’s definitely one of the bands (Queens of the Stone Age) that I would say would be fantastic, because they’ve spent so much time with me here. They’re wonderful people, but it hasn’t worked out.

When The Bovine started, there were three of you, but Chris and Wes are gone and you’re the last man standing. What’s it like looking back at everything that’s changed over the years?

I don’t even think about it anymore, but I could tell you there would be no Bovine without them. They’re both about seven or eight years older than me I think, so I was pretty junior in terms of my social development then and Chris was a famous DJ on CFNY, which is now the Edge in Toronto. He was the DJ, he did the Friday nights live from clubs around southern Ontario, or the CN Tower, live DJ’ing so people would have dance parties at home when Chris was DJ’ing. He was friends with The Cult and the Red Hot Chilli Peppers, he was just the guy in Toronto at the time. So opening the club and having him as the major promotional force put us on the map very quickly.

He once threw a party where he brought back six limos with every major act from Lollapalooza. He drove down at midnight with the Red Hot Chilli Peppers, Ministry, Ice Cube, Ice-T, George Clinton & P-Funk, Bootsy Collins, it was an incredible party.

The scene is ever changing, live venues struggle to keep up a lot of the time. Is there anything specific that you’ve done over the years to keep up without really having to change too much?

I think it’s one of those things… We’re a bit of an everyone place, we involve all of the community. Whether it’s LGBT, whether it’s Pride, whether it’s the TIFF people from the movies, we do all the music festivals, so there’s tonnes of people rotating through here. To just be a little live punk and metal club would’ve been the death of us years ago. That’s mostly what we do, is live shows downstairs, with the Tiki bar on the roof, but you’ve got to add more people to the mix to be able to keep the legend going and keep it fresh frankly. I think that’s part of the success of what’s kept it going for so long.

Another thing we do is we don’t get stuck on one kind of music for too long. Even though it’s mostly punk and metal, we’ve drifted from that 90’s super sexy, glammy, hardcore stuff that The Sinisters were doing. More towards the early 2000’s, with all of the Warped Tour bands. That sort of southern California punk stuff. We were hard on that pop-punk stuff for a while, that’s probably the time where Sum 41 would do their surprise shows. Then now we’re in the middle of a bit of a metal fetish here, a lot of the younger kids have grown their hair out and they’re wearing super tight hipsters with bell bottoms and cowboy boots and they’re listening to metal. It’s not that kind of hardcore, beer belly, tattooed screaming screamo metal, it’s more like 80’s metal again, but not in the goofy way.

You have to be flexible with what type of programme you’re doing. You can only dictate so much in the scene. I can find a cool band in that scene, but I’m not going to make a scene.

The Bovine has traveled through genre after genre, for the past two and a half decades. Do you have any plans or visions on how the upcoming years will play out? Anything you’re willing to tease towards?

No. (laughs) There’s no planning about that. We plan the shows and we launched the Tiki bar four years ago to combat the rising overhead on Queen St. West in Toronto, but it’s the scene that dictates where we’re going. If we were to become an all pinball place in five years, it’s gonna happen. It’s not really up to me. We’re super sensitive to the customers, but our roots are still to put on shows. There will always be shows here, there’s no changing that.

When you opened up, did you ever expect it to blow up the way that it did and become such a vital part of Toronto’s music scene?

When Chris and Wes were here it was really rock n’ roll cheers. Just like on television, where everybody knows your name and all the bands hung out, but there wasn’t really any live shows going on. That really happened when they left. I could take a little bit of credit for it, but it was the customers asking for special shows. Where the stage is now, there was a big pool table and we would flip the pool table on its side and push it behind the curtain and have a show once in a while, then have more shows, then have shows every weekend. Now we just have shows all the time, it just built on its own.

Do you think that’s why it became such a vital part of Toronto’s music scene?

I think in the beginning it was the sensational parties that Chris was throwing and Wes knew the tour manager for U2, so U2 came down and partied for a night and I knew the guys at Sony, so they brought down Velvet Revolver. So you’re hanging out with all the guys from Guns N’ Roses and Velvet Revolver and it’s all cool. Those types of parties put us on the map, because we weren’t a live place then. The live stuff evolved later. Queens of the Stone Age hanging out, all that stuff builds the legend. Once all the bands started hanging out, they wanted to play, so we accommodated that. Which was probably the smartest thing I ever did.

This interview can also be found on Aesthetic Magazine’s website.

One thought on “Interview: Darryl Fine reflects on 25 years of the Bovine Sex Club”