Australian bassist Tal Wilkenfeld has been playing alongside legends like Jeff Beck, Steven Tyler, Prince, Ringo Starr, Sting, Eric Clapton, and Mick Jagger since she was in her teens. Now, she’s opening for The Who on their ‘The Who Hits 50’ tour, as well as going out on her headlining tour.

Wilkenfeld told us in our recent interview how it felt being chosen to open for The Who, her first headlining tour, coming into the scene at a young age, working on new music, her musical influences, and more.

You rose up quickly to the big stage as a teenager, rapidly moving from Jazz clubs to playing alongside Jeff Beck. How did it feel being chosen as The Who’s opening act for their ‘The Who Hits 50’ tour?

I felt like, I was actually kind of in shock, I didn’t believe that it was really happening. I still don’t believe it’s really happening, I probably won’t even until I’m on the stage. That’s usually the mentality that I use for anything, especially in this industry where things are constantly changing. There’s so many moving parts and variables that I try to not get too excited about anything until while it’s happening.

Weaved in with that tour is your first headlining tour. How will you approach going from an opening slot for a band of their stature to your own headlining performance?

Well, me and my band have done a bunch of shows last year. We played about eight shows in Japan and also in LA. We really enjoy it, so it’s going to be cool to go between playing in arenas to small clubs. Because it’s a completely different approach to how you perform as well. It’s a really great experience for us.

What would you say you’ve learnt most from having the opportunity to be in the studio and on stage with such experienced artists?

What didn’t I learn? (laughs) A lot of what I learned can’t really be described in words. I wish I could, because then I’d be able to teach a lot of people [and] give a lot of people a lot of valuable insight. It’s really more about the actual experience of feeling how another artist may react in any particular moment to what you’re playing and vice versa. You can only experience that by doing it. It’s like having a conversation with a really insightful, wise and smart person and you’re feeling it while you’re having that conversation with them and you’re experiencing what it feels like to have your mind lead from one end to the other in a very different way because of the way their mind is working. I don’t know if that makes any sense, but it’s similar when you’re playing music with really great people.

Can we expect your vocal debut, (expected this summer,) to stay true to your jazz and rock roots, or will you be exploring new avenues as well?

I don’t even know if it’s really jazz music. I’m very influenced by jazz because I’ve played a lot of jazz and I suppose jazz is an interesting term that doesn’t necessarily mean it’s a genre. It’s more of a mindset. I see jazz as meaning a mindset I use when I play and improvise. So that mindset I use in any type of music, but the actual aesthetic presentation is more in the rock songwriter vein. 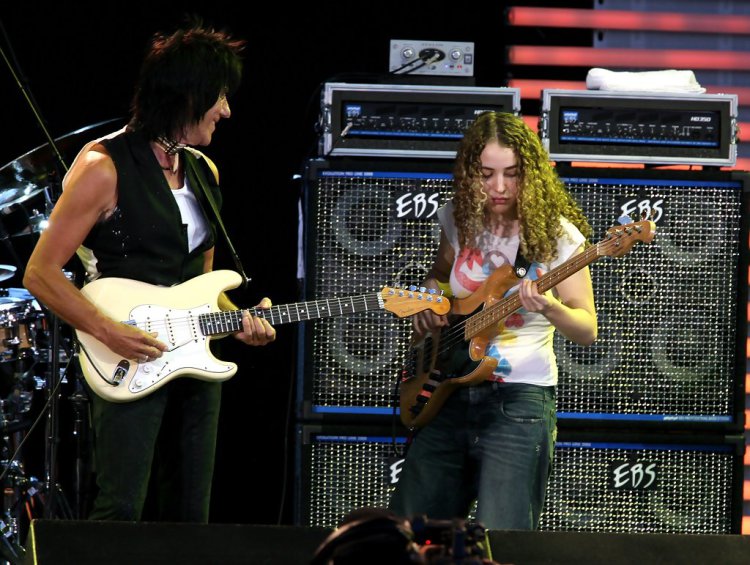 Are there any themes that you focused on lyrically in the new album?

Playing in front of the massive amount of people that you did at Eric Clapton’s Crossroads Festival back in 2007 at such a young age would come off as intimidating to most people. How would you describe the way you felt walking out onto that stage and seeing all of those people looking up at you?

Honestly, I was in a little bit of a daze. I didn’t really pay too much attention to the audience. I was pretty focused on performing well and having fun on stage with Jeff (Beck) and everyone else. It just felt like an audience out there, a flow of energy out there, it felt really nice. I don’t focus too much on that. I suppose if I did, then maybe I would feel intimidated. (laughs)

You’ve performed and recorded with so many iconic artists that many musicians your age could only dream of. Do you ever wonder what life would have been like if you’d decided to stay in Australia?

I have thought about that a few times, but I don’t have an answer as to what that would look like. I’m just grateful [that] I did come out here, but I try not to spend too much time focusing on what would have happened type of questions because that turns you down a rabbit hole in all kinds of ways. I’m grateful.

Out of everyone you’ve gotten the chance to work with, is there any one in particular that you had previously taken inspiration from?

I have a very interesting musical background. I wasn’t exposed to a lot of music growing up. I had very limited access to music and I moved to america very young and started playing with a bunch of these people very quickly. When I see these people, I mean these legends. At the time I wasn’t really familiar with who they were. I hadn’t had the chance to get to their music yet. So I sort of experienced things backwards. I played with a lot of people before I’d heard their music.

It must have been kind of interesting, realizing afterwards what the impact of that really was looking back on it.

You said you used to write lyrical songs back before you fell so deeply in love with your bass. Do you plan on bringing back any old material?

The material that I’ve been working on for this current album that’s going to come out this year, some of those songs are old. I mean not from when I was 16, but there’s songs in there from [my] early 20’s that I’ve kept.

Growing up in Australia, you said that you didn’t have too much access to music, did you have any musical influences there that paired in with your American influences?

My musical influences were Jimi Hendrix, actually Herbie Hancock [I] heard very young and Rage Against the Machine was a big influence. Quite a few bands, 90’s rock bands that I’d heard and was influenced by and that was about it. I hadn’t heard much else.

This article can also be found originally posted on aestheticmagazinetoronto.com