With a roster of such astoundingly talented artists in town for JUNO week and weekend, so many events, and so much going on – it wasn’t exactly until afterwards that everyone took in the glory of it all. Even the people who took home the shiny trophies with them.

After the JUNO Gala Dinner, where he was honoured with being the one to give the In Memoriam performance with his song, “Breathless”, winning Contemporary Roots Album of the Year at the Gala for Earthly Days, and playing another show at Irene’s later in the evening, I was given the pleasure of speaking with William Prince about all of that and much more.

The Winnipeg, Manitoba born man has a voice that could carry down a block and still give the people at the very end goosebumps and a personality to match. Being ever so humble and personable after giving two strong performances and a full day of awards and moving around the city, now that’s admirable. On top of that, taking the time after an exhausting few days, when you know he’s got to be ready just to go to bed, and still being delighted to and eager to give an interview – that speaks a great deal to his personality.

In our new interview, you’ll get to know William a bit better, hear what he has to say about life, loss, family, music, and much more.

Yeah, I think I’ll feel it tomorrow. I’m ready to celebrate. To come off tour and the madness of it all, the pressure is off and tomorrow I get to be with my family and have another great night. It feels pretty good. It’s very validating, not being recognized for an identity, just kind of… there’s jurors who listened to the record and liked the songs you know. That’s… I think I’m slowly starting to celebrate that.

There’s so much going on that I don’t think, even with anyone, everybody is just so busy that it doesn’t even sink in until after it’s all done. Especially coming off tour too. You get that minute and you’re like “oh, wow.”

Yeah, it’s been an emotional time too, being away from my family. But I’m very happy for everybody that’s involved in this. My managers work so hard and the agency and everything. I’m happy, I feel like I came through for everybody. It feels that way, and it’s a cause for celebration. 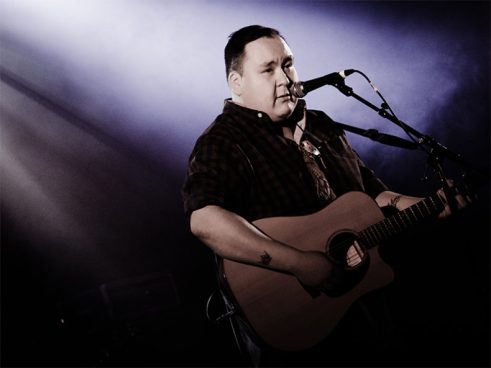 How is it, coming from a venue like the Shaw Centre and playing for such a large amount of people, then setting into a little intimate venue like Irene’s? It must be somewhat strange to make that transition.

Yeah, I’m comfortable here. I think my music comes across better in small rooms than theatre sized. I’m lucky enough that a lot of the shows I’ve played I’ve had terrific audiences. That’s the great part about being an opener sometimes, you get a chance to win people over. I love these shows, it’s instrumental and stuff. It was great, I have nothing to complain about. I’ve played far more difficult shows.

My sister is in the audience and she’s a full time nurse and mom, so for her to come here and let loose, hear some new songs that she hasn’t heard is pretty fun. It’s nice to test them out in these environments. I started four new songs and then I went into Earthly Days, it was great. [Also], just to play with Lynne (Miles). I’ve known her for so long and known of her for so long, just her influence in Canadian music. Everyone loves her, she’s a sweetheart. I quickly learned who exactly was singing on my record and I’m such a fan. It was definitely the highlight of the show, having her beside me.

You could see it too, in the gaze between the two of you, that it was something that was meant to happen.

Like I said, I’ve been hearing her voice on the album and people ask, when they find out, they’re so moved by it. It adds such a wonderful touch of class.

You were saying that it was a celebration for… that you made it for the rest of the team. It’s an award for all of you in my opinion.

Yeah, for sure. I just love that they listened to the songs and decided that way. It was really cool, I was really happy about the nomination and the things people were saying. No matter the outcome, we win and it gets a little bigger and busier, or we don’t and it stays as big and busy as it is. No competition in heart really, it was just a nice pat on the back to be recognized. I think of taking these songs from the little place that I grew up and then you’re on the stage with all of those people there. It’s not really sinking in.

Are you surprised? Were you expecting it?

We talked about having no expectations going in… I’m so fortunate that all the people in Canada are often times friends. There’s no loss. Quantum Tangle won indigenous (album of the year) and they’re hard working. I’ve seen them at a lot of the things that I’ve been at. Great company, great records. It’s a really big honour for me.

It seemed like you and A Tribe Called Red had a bit of a moment there. Are you guys friends?

Yeah. I know Tim, he’s a great friend of mine. We go back aways and I know Bear even just from them touring and bumping into them here and there. I was so taken by how happy they were for me. That was really something, because they cracked outside of the indigenous category too and that was very nice of them. [It] was kind of what I was hoping for, because I watched what it did for them. It legitimized their craft even further and really put on a bigger spectrum of viewing. These guys are great, talented composers and musicians and they love what they do. They’re so positive and I see [that] when things go your way and you’re fulfilled and travelling, playing the shows. It was nice to finally spend some time with them in an environment of being a peer. That’s really cool, because they’ve had such a huge two years and it put us in the same thing as such great guys.

Do you think there will be a celebration between friends? You guys are all taking things home with you.

Yeah, they have really good ties to Winnipeg too, where I’m from. All the Manitoba music people, Manitoba film and music people, the organizers that are here on behalf of Winnipeg and Manitoba this year. They’re kind of our adopted Winnipeg boys too. It does feel like collection in our community. When we go home it’ll get presented the right way.

So there will be a separate presentation back home, or?

It’ll just be… they’ll do the articles or whatever they do about it and celebrate it for the Winnipeg music scene. They’re pretty supportive in that sense.

Having your family here, you were saying is pretty special. What do you think it’s like for them, getting to see, especially the win? It’s pretty huge.

Yeah, my sister has been putting up with my music since it wasn’t very good. (laughs) She’s my longest running supporter and one of the closest people to me in the world. For her to be here… I wanted to show her what we were working so hard for and then she takes that back and expresses it to our mom in her own way. The way I do it is I [tend to] minimize the details because I do it all the time. Like “it was a great show.” For her to be so proud is very gratifying. Just to hang out together and be together and do something fun. [We’ve got a] busy parent life, busy working life, [so] for her to come and get to just take a load off is really great. That my music brought us here, together, is really huge.

It’s quite amazing to actually see that come to. When you’re listening to it as a kid, you don’t really think that anything like this is going to happen.

Yeah. (laughs) I don’t know how to feel about it just yet. It’s pretty surreal. You hear it and you get to go up there, then it’s this passageway for a moment. Everybody is listening and I just wanted to show them that I was thankful. It’s a sacrifice on your family’s part. I’m away from my son. It’s very emotional with my dad passing, because like I was saying, he’s the originator of the music. Such an influence on everything I do.

The record is about serious love. I like the heavier stuff. Life is too short for small talk. I like sharing those things with people and making that connection.

You said when you were on stage that… there’s always that go to person, that person that you want to go right to and say “Hey! This just happened! I’m so excited!” If you were to say something to him (his father), what would it be?

I wouldn’t have to say much, he would say everything to me. How proud he is, tear up and cry, telling everybody and calling everybody. Just so proud of me. I know exactly what he would do, so it’s not like I’m missing out on it completely. (laughs) Just to bring him a trophy and let him hold it. Tell him about the experience and who I met.

The In Memoriam, how does it feel to get selected to do that? It’s a pretty big thing, especially with the loss of your father. His son was there accepting an award for him.

When we got the word for it, I thought it was almost perfect. I grew up playing in funeral and wake services for the church because that’s where I learnt music. My dad was a pastor. We were the first ones to show up and the last ones to leave. So I though, how fitting that the night where this biggest music thing comes full circle back to a touch of… it was kind of like a mini wake service for a second there. To remember.

I felt really comfortable and really honoured just to be attached to and them announcing me before this list of incredible people and just the centralized theme of Leonard’s (Cohen) passing. It just shows how he trickles down and inspires people. A lot of people drew a Leonard comparison to me. I don’t know if it’s the writing style or lyrical, [but] I get that a lot and listening to his music even more, I see why people draw the comparison. So even that was a little serendipitous, almost cosmic alignment too, to be there honouring him with a song of mine.

They shared with me how excited they were to have me on the show and the JUNO people all day being so accommodating and professional, it’s a bit heavy, but it was a terrific treat and a huge honour to be in that environment. [Also] people afterwards [saying] we’ve never heard you before and being so encouraging right away and immediately on the side of what I’m trying to do. That’s the best part. I love that I got to play, what better condensed place to expose and reveal yourself in a sense, in that room of people. I’m glad I got to add to the performance and not just be a name called to. It was really great.

This interview can also be found on The Spill Magazine’s website.